We Can Do Better, America Now Available for Digital Pre-Order

August 23, 2019 / adamelijah / Comments Off on We Can Do Better, America Now Available for Digital Pre-Order 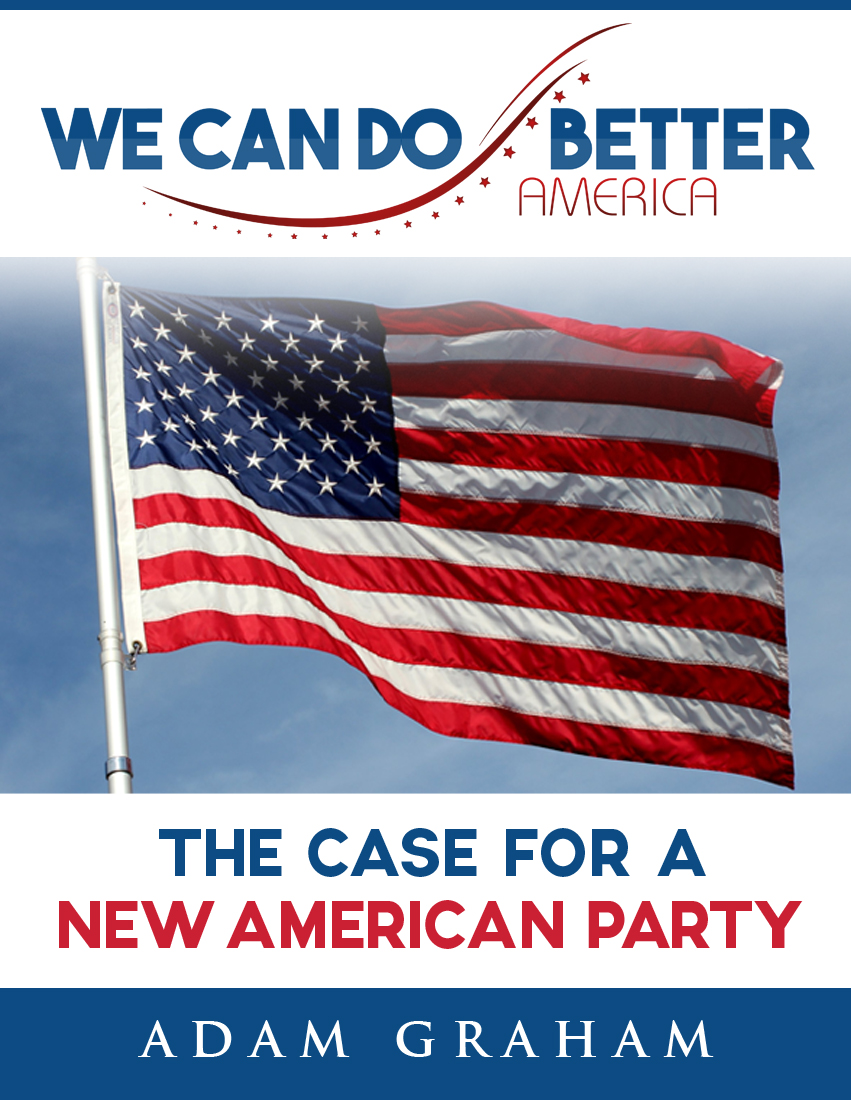 We Can Do Better America (affiliate link) is now available for pre-order in the Kindle Store.

We Can Do Better, America makes the case for why we need a new conservative party and explains how we can do it.

The e-book will be released on September 16th. The pre-order price is set at only 99 cents. That will increase after the release date. This book will be enrolled in the Kindle Select and Kindle Lending Library program during its initial launch, so Amazon Prime and Kindle Unlimited subscribers will have a chance to read the book for free. We’ll have more details on the physical book launch soon.

August 14, 2019 / adamelijah / Comments Off on Americans Need a Better Way

I’ve been a critic of Donald Trump and the politics he represents. He’s remained unpopular despite a strong economy. Yet Trump has a fair chance of being re-elected.

You needn’t look any further than the Democratic Party to find out why. Rep. Joaquin Castro (D-Tx.) the brother of Democratic Presidential candidate Julian Castro tweeted out the names of Trump donors in his district and set them up for harassment and intimidation. Democratic Presidential candidates Kamela Harris and Elizabeth Warren suggested that teenager Michael Brown was murdered in Ferguson despite the findings of the Obama Justice Department, earning four Pinocchios from the Washington Post’s fact-checker Glenn Kessler.

At the same time, five Democratic Senators including Senate Minority Whip Dick Durbin (D-Ill.) filed a most unusual legal brief in a gun-rights court case. It didn’t argue why the Supreme Court should rule in their favor, but it did threaten the United States Supreme Court with court-packing should they not see things their way. Their argument for court-packing is that the court is “sick” in that it’s not as left-wing as these Senators want.

Over the last two and a half years, Democrats have had an opportunity to be better than the poisonous cruel, divisive, dishonest, corrupt, norm-violating politics of Donald Trump. Instead what Democrats have offered is a different flavor of the poison. We’ve seen a Democratic Party that winks at anti-Semitism in the way Republicans wink at White Nationalism. The Democrats have fully embraced an inhuman abortion rights fanaticism that leads to thunderous applause for laws that allow for abortion right up to the moment of birth.

At the same time, Republican critics of President Trump have failed because all they offer is criticism. Senator Romney or Senator Sasse will stick their heads up and offer criticism of the President but not give Americans an alternate path. They’re not trying to change the Republican Party. They know they can’t. Thus, to those in the party, their criticism comes off as passive-aggressive undermining of the person who’s actually in charge and no one admires that.

Others have chosen a quiet departure. There have been many retirements in the House Republican conference in 2018 and so far in this cycle. Some have publicly said that having to deal with the constant nonsense that President Trump brought to the office was just too much and others have said so privately. Most are too afraid of Trump’s more rabid supporters to speak their mind. That’s not leadership, that’s abdication and political cowardice.

The one person who has shown some leadership is Representative Justin Amash (I-Mi.) He recognized the Republican Party is broken and he left it. However, he’s continuing to fight for what he believes he’s right. He’s still fighting for the Constitution. I’ve expressed my hope that he’ll help start a new political party. Even if he doesn’t, he’s shown far more leadership than anyone in these sorry political times.

Americans desperately need a positive and serious alternative to the toxicity of both President Trump and the Democrats. Without it, the only debate will be over whether Americans end up choosing the best of the two horrible options we’re sure to be given in 2020.